Greetings and Welcome!  Introducing musician/songwriter — Barby Holder — (“Our most requested performer” – KFMS News, 1999) singer, songwriter, guitarist and hammered-dulcimerist. Currently touring colleges, coffeehouses, Fine Arts and Highland Festivals, Barby entrances her audiences with her own arrangements of traditional folk, country and Celtic music, with enthusiastic and comedic interaction.  Her original songs, such as The Moon’s Fool, Showdown, and Haunt Me Forever have gained excellent reviews and critical acclaim.  Her music keeps hearts light and feet tapping with her delightful fingerstyle guitar and lilting vocals, peppered with hammered dulcimer selections.

Currently recording on the Barbary Coast  Productions, Inc. label, Barby currently has three solo albums to her credit and has performed as a studio musician/vocalist on at least five other recording label projects thus far, with several pending.  Still writing songs, she hopes to release a new CD (but probably not until the next century).   Keep your eyes on this webpage for updates.

Born in Winchester, Virginia, Barby applies her Celtic/Appalachian heritage and unique musical talents to presentations from British Isles chanteys to original songs to American folk and country interpretations.  Her extensive training and experience in outdoor and outreach theater has sharpened her awareness of each individual involved in the total music experience.  Audiences of all ages find her casual approach refreshing and they keep coming back for more.

She has written the incidental music for several stage productions, including Shakespeare and children’s theater, and she continues her involvement in such stage productions in the Harrisburg area.  A frequent guest on radio and TV, her concerts are often recorded live for simulcast and later broadcasts.

BRAND NEW! Haunt Me Forever, the 1999 CD release, combines old-timey folk songs, sea chanteys, original dulcimer/guitar/harp arrangements of traditional fiddle tunes, two American folk tunes, and a few original surprises, including the title cut, which is reaping out more than she bargained for when she wrote it!  (Folk note: every album features at least one song by the late Phil Ochs.  Eventually, Barby hopes to cover them all.) 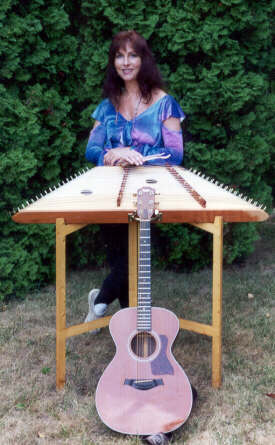